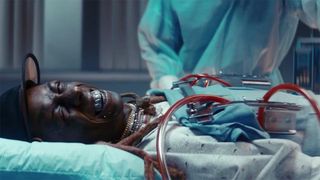 After releasing the video for his Ariana Grande collaboration, “Rule the World,” 2 Chainz is back in support of his 2019 album, Rap or Go to the League, sharing a noticeably bizarre clip for “2 Dollar Bill.” The track welcomes guests verses from Lil Wayne and E-40, as it boasts production by DJ Mustard.

We see a cast of weird characters throughout 2 Chainz’s “2 Dollar Bill” video, while Wayne and E-40 both make appearances alongside Tity Boi. Most notably, Weezy goes under the knife, as the surgeon retrieves a number of random items from inside him.

After watching the unusual music video above, you can then revisit 2 Chainz’s fifth studio album, Rap or Go to the League, underneath. In addition to Lil Wayne, E-40 and Ariana Grande, the LP features Kendrick Lamar, Travis Scott, Chance the Rapper, Young Thug and Ty Dolla $ign, among others.