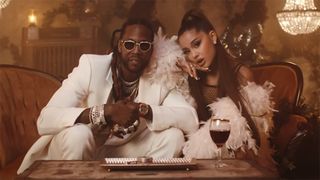 Less than two weeks after delivering what could very well be his best album yet, 2 Chainz shares the music video for one of his Rap or Go to the League standouts in “Rule the World” featuring Ariana Grande.

Fell in luv with a real one that’s a dedication … RULE THE WORLD ? feat @arianagrande VIDEO LINKInBIO

The “Rule the World” aesthetic is directed by Sebastian Sdaigui, as we witness 2 Chainz and Ariana performing at a jazz nightclub in Los Angeles.

2 Chainz’s Rap or Go to the League, the rapper’s fifth studio album, boasts features from Marsha Ambrosius, Young Thug, Travis Scott, Kendrick Lamar, Ty Dolla $ign, Lil Wayne, E-40, Chance the Rapper and Kodak Black, in addition to Ariana Grande. Since releasing the LP, he has also dropped a video for “Money in the Way.”