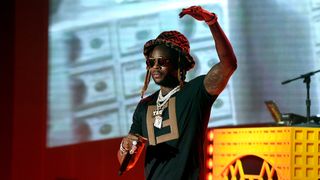 2 Chainz continues his press run in support of his recently released fifth studio album, Rap or Go to the League, this week paying a visit to Power 106 Los Angeles and LA Leakers. During his time in the studio, 2 Chainz of course discussed the album, while also touching on his relationship with LeBron James, being into the wrong things early on in life, quitting college basketball and more.

Chainz began by detailing his Los Angeles Lakers fandom and his interaction with LeBron James after Bron passed Michael Jordan on the NBA’s all-time scoring list earlier this week. In case you were unaware, James also helped A&R Tity Boi’s new album, so 2 Chainz dove into his relationship with the NBA Superstar.

One of the key moments from 2 Chainz’s interview with LA Leakers comes when he discusses his college basketball days. After some legal issues in high school, it was tough for Chainz to find the right collegiate fit. He did, however, end up hooping for Alabama State, but ultimately decided to quit and use his Pell Grant money to buy a pound of weed to flip.

Elsewhere in the interview, 2 Chainz speaks on the making of Rap or Go to the League and his concepts behind the album and various songs. Chainz ultimately wants the project to serve to teach the younger generation, as he insists he stopped dumbing things down with this particular LP.

To hear 2 Chainz discuss all of this and more with LA Leakers, simply press play above. Also, you can dive back into Rap or Go to the League underneath.