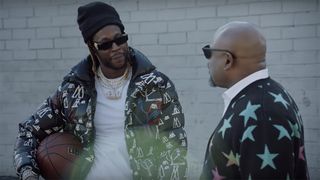 On the first-ever episode of Crate Talk, 2 Chainz gets together with music industry mogul Steve Stoute to discuss his come-up, all while playing a game of SELF, a remix of the basketball game HORSE.

I hit @youtubemusic and told Em had an idea I needed there help bringing to life. Wanted to pick the minds of ppl who inspire me and tell there stories to hopefully inspire others.. Introducing “Crate Talk” Ep 1 with @SteveStoute up on my YouTube Chanel https://t.co/mq8o3xR1eC pic.twitter.com/9h5Mh4fepR

While speaking on working with the likes of Nas, Will Smith and even Enrique Iglesias, Stoute revealed that one of his bigger regrets is not signing Alicia Keys when he had the opportunity. Stoute also talked about working with Pusha-T on McDonald’s signature “I’m Loving It” jingle, which has been a staple for the fast food franchise dating back to 2004.

To close out the episode, 2 Chainz was forced to explain why he turned down a deal with JAY-Z. The decision ultimately came down to loyalty, as 2 Chainz insisted on showing appreciation to an Atlanta DJ who helped with his exposure early on. When JAY-Z called 2 Chainz asking him to fly to New York for a meeting, Chainz declined because his DJ friend was not permitted to go with him.

Press play above to watch 2 Chainz and Steve Stoute compete in a game of SELF on the inaugural episode of Crate Talk, or visit YouTube if the player is malfunctioning. Following, you can revisit Chainz’s new album, Rap or Go to the League, underneath.