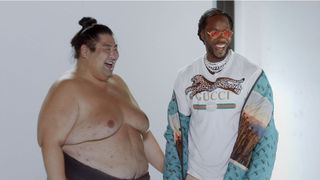 On VICELAND’s show Most Expensivest, 2 Chainz travels the world in search of the upper echelon of products, whether it be a $2,000 brunch or a $10,000 emergency survival kit. For the latest episode of the program, the 41-year-old rapper tries something a bit different in sumo wrestling. 2 Chainz isn’t alone to face these mammoth human beings, though, as he is joined by NFL legend, Jerry Rice.

While watching Yamamotoyama Ryūta, the heaviest Japanese human in recorded history weighing in at nearly 600 pounds, and 350-pound Ulambayar Byambajav, a four time World Sumo Champion, square up in the circle, 2 Chainz and Jerry Rice are briefed on the sport of sumo wrestling. These guys train by hitting each other upwards of 100 times a day, while their diet is also pivotal to success. Sumo wrestlers basically eat as much as possible, before enjoying a nice nap to ensure it all stays put. While raking in up to $500,000 a year, these athletes can also cash in on millions of dollars in endorsements, similar to any other professional. Their equipment can be incredibly costly, too, as some belts run from $10,000 to $20,000, and a silk robe can go for $30,000.

After learning about the sport, 2 Chainz and Jerry each try their hand at sumo wrestling. To see how each fared, you’ll have to press play above.

Tune in to Our 50 Favorite Tracks of 2019 Playlist
MusicsponsoredDecember 20, 2019
Follow
Highsnobiety Music
What To Read Next
Load More
Search Results
Load More