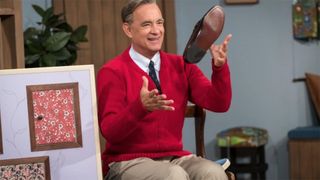 Last September we got our first look at Tom Hanks as influential TV personality Fred Rogers, more widely known as Mister Rogers, for Sony Pictures’ upcoming biopic, A Beautiful Day in the Neighborhood. As the movie is due out later this year, the studio now shares the first official trailer for the anticipated drama.

It only takes one person to inspire a world of kindness. Based on the true story, #ABeautifulDayMovie in theaters this Thanksgiving. pic.twitter.com/iWXyZQRp4t

A Beautiful Day in the Neighborhood tells the true story of the real-life friendship between Fred Rogers and journalist Tom Junod. Played by Emmy winner Matthew Rhys, Junod becomes filled with skepticism shortly after being assigned a profile of Mister Rogers. During his time with Rogers, however, Junod gradually overcomes his dubiousness all while learning about empathy, kindness, and decency from one of the entertainment industry’s most beloved personalities.

Susan Kelechi Watson and Chris Cooper also star in A Beautiful Day in the Neighborhood, which is directed by Marielle Heller. You can catch the film in theaters November 22.