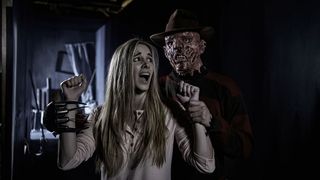 In the spirit of Halloween, Roy H. Wagner ASC, the cinematographer who shot A Nightmare on Elm Street 3: Dream Warriors, has partnered with Moai Films, VideoVillage.Pro, and Global Village, Inc. to highlight the famed horror movie series by shooting a scene from the original 1987 film on Apple‘s iPhone 11. The question is: can a new iPhone 11 Pro compare to a film camera?

Wagner utilized some of the original crew from the ’80s picture to rebuild the sets and reshoot a thrilling chase scene. Directed by Lukas Colombo of Moai Films, a production crew of 40 people came together to recapture a piece of the Nightmare on Elm Street project using modern technology.

You can get a behind-the-scenes look at the re-shoot above, as well as witness a side-by-side comparison, as Freddy Krueger meets the iPhone 11 Pro.

The 10 Best Horror Movies Based on True Stories
MoviessponsoredOctober 30, 2017

The iPhone 11 Pro Camera Is an Instant Meme & These Are the Funniest
DesignsponsoredSeptember 11, 2019

Is the iPhone 11 Pro Camera Worth It?
DesignsponsoredSeptember 11, 2019