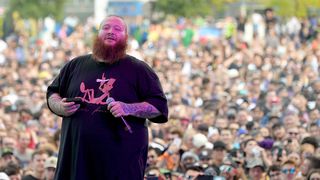 Action Bronson is gearing up to release his fourth studio album, White Bronco. Following last month’s release of the title track, the New York rapper returns with another song from the project, dubbed “Prince Charming.”

“Prince Charming” is a melodic affair produced by Knxwledge, then featuring two verses from Action. After listening to the new cut showcased above, you can watch Bronson’s trippy “White Bronco” video underneath. His new album is due out November 1.

Up next, peep Travis Scott and Drake’s newly-released video for “SICKO MODE.”