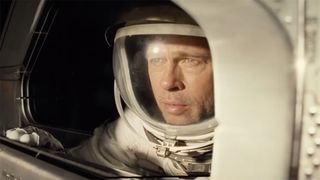 Brad Pitt is off to find Tommy Lee Jones (and save the world) in this exclusive new #AdAstra trailer. In theaters September 20th: https://t.co/s2X11WOPsZ pic.twitter.com/9dOYE1NYDT

Pitt portrays Army Corps engineer Roy McBride in Ad Astra, as he embarks on a space mission in search of his father who was previously presumed dead. Roy’s dad, Clifford McBride (played by Tommy Lee Jones), is an astronaut who journeyed to Neptune many years ago in search of extraterrestrial intelligence. When he never returned, Clifford was declared deceased, until inside information suggested he may still be alive after all.

Liv Tyler, Ruth Negga, Donald Sutherland, Kimberly Elise, and Jamie Kennedy also feature in James Gray’s Ad Astra, which is due out September 20 — after multiple delays — via Walt Disney Motion Picture Studios. The movie marks a reunion between Gray and Pitt who previously worked together on 2016’s The Lost City of Z, of which Pitt served as a producer. You can also catch Pitt in Quentin Tarantino’s Once Upon a Time In Hollywood later this month.