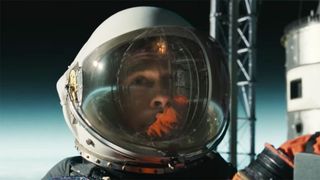 While Quentin Tarantino’s Once Upon a Time In Hollywood is due out next month, Brad Pitt is starring in another blockbuster picture this year, portraying Astronaut Roy McBride in James Gray’s new sci-fi film, Ad Astra. With the movie scheduled to release in September, today we get our first look at the much-anticipated picture.

Pitt’s Roy McBride is on a mission to find his lost father in Ad Astra, as his dad disappeared in space roughly 20 years prior. During his time at the outer edges of the solar system, McBride begins to unravel a mystery that ultimately threatens the survival of Earth.

The answers we seek are just outside our reach. #AdAstra pic.twitter.com/bXivFW7Jr6

The 25 Most Stylish Movies & Shows of 2019
MoviessponsoredDecember 18, 2019
What To Read Next
Load More
Search Results
Load More