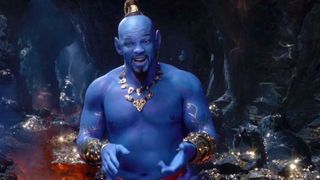 Following months of teasers, Disney has dropped the first official trailer for its Aladdin live-action remake. Unsurprisingly, most of the talk has focused on Will Smith’s Genie, with not everybody convinced by the muscular blue spirit.

The preview doesn’t deliver much in the way of action, but fans get a glimpse of the movie’s main characters for the first time. These include Mena Massoud as the titular lead, Naomi Scott as Jasmine, and Marwan Kenzari as vizier Jafar.

Smith’s Genie who steals the show, however. “You really don’t know who I am?” asks the beloved wish-granter. “Genie, wishes, lamp — none of that ringing a bell?!”

So far, reactions to the trailer, which aired during the 2019 Grammys, have been mixed to say the least. Peep what people had to say about Smith’s Genie below.

First look at Will Smith as the Genie in the up coming live action Aladdin pic.twitter.com/yFLxrVJXv2

i'll never sleep again and it's all will smith's fault #aladdin pic.twitter.com/wUL79ZchIG

Will Smith genie is what appears in my room when I have sleep paralysis pic.twitter.com/NzMDOgvkkz

Either this is a super clever marketing troll by Disney, and this isn’t what the genie will actually look like for Aladdin or… I dunno. Man, I just can’t believe this can possibly be the real thing.

Remember when Will Smith begged everyone to wait until we saw the blue CGI version of the genie before we judged? Yikes. pic.twitter.com/uP3fVUrELr

Will Smith as the genie looks like what one of those kids from the 90’s Fruit Gushers commercials would look like if they never found a cure for their fruit curse.

Dr. Manhattan looks better than the new Genie and that movie came out in 2009…
I cant't wait to see it! pic.twitter.com/jLjCJbG1hC

Just saw the #Aladdin preview. Totally sold up until I saw the genie. pic.twitter.com/kqmQ3IMtC3

Others — well, one person — dug Smith’s look, however.

Listen to Will Smith & DJ Khaled Remake “Friend Like Me” for New ‘Aladdin’ Soundtrack
MusicsponsoredMay 23, 2019

Tom Holland Turns Will Smith Into a Pigeon in New ‘Spies in Disguise’ Trailer
MoviessponsoredJuly 2, 2019
What To Read Next
Load More
Search Results
Load More