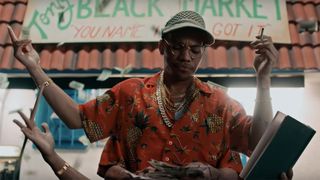 For everyone who’s been waiting on new material from Anderson .Paak, the time has come. Today Zane Lowe premiered the 32-year-old musician’s latest release, “Bubblin,” as Beats 1’s World Record. Shortly after, he unveiled the wild visual, which features the artist’s real life-son and – at one point – finds him grow six arms. Watch it above.

In speaking with Lowe regarding the track, Paak revealed, “I was trying to get Lil Simz to rap on it first because she was in the studio too. I remember trying to get other people on it, and then eventually I just wrote on it.”

We can also seemingly look forward to more music on the way from Anderson. “I have 65,000 songs in the vault,” he said. “No features, fam.” Listen to his chat with Zane below.

In other music news, Jennifer Lopez just released her new single, “Dinero,” with Cardi B and DJ Khaled.