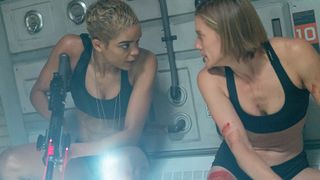 Netflix will soon be premiering its new sci-fi drama series, as this week we receive the official trailer for Another Life.

Katee Sackhoff is headed back into the great unknown. ANOTHER LIFE premieres July 25th. pic.twitter.com/WqzfhDio6E

Starring Katee Sackhoff (Battlestar Galactica, Longmire) as Commander Niko Breckinridge, Another Life begins as a mysterious alien artifact lands on Earth. To search for alien intelligence, Commander Breckinridge then leads a team on humanity’s first interstellar mission to the planet of the artifact’s origin, while her husband (played by Justin Chatwin) attempts to make contact with the mysterious alien item.