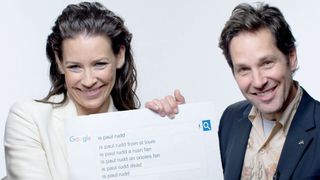 Wired has linked up with the cast of Marvel’s latest hyped movie, Ant-Man and The Wasp, to answer the internet’s most-searched questions surrounding the movie.

Paul Rudd, Evangeline Lilly, Michael Douglas, and Hannah John-Kamen — who star as Ant-Man, the Wasp, Dr. Hank Pym, and Ghost, respectively — all feature in the video. They were handed boards with Google’s most pressing questions around the movie, its storyline and characters, and information about the actors themselves. Therefore, questions varied from “How big can Ant-Man get,” to “What is a Paul Rudd.”

Watch the video above and let us know if you’re excited for Ant-Man and The Wasp in the comments.

For more on the film, check out our ‘Ant-Man and the Wasp’ critic round-up.

Man Claims He Was Hit By a Car But Still Saved His Air Jordan 1s
SneakerssponsoredMarch 24, 2020

Jim-E Stack Beautifully Depicts How “A Man Can’t Know What It’s Like to Be a Mother”
MusicsponsoredAugust 1, 2019
What To Read Next
Load More
Search Results
Load More