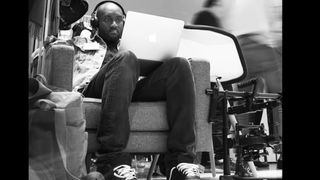 Virgil Abloh, KAWS, and Anna Wintour are among a host of celebrities and public figures featured in Apple‘s latest “Behind the Mac” ad. The commercial shows stars, children, and budding creatives all sitting behind their MacBooks — paying homage to the laptop’s presence in popular culture and implying that it’s the key to success.

Others featured in the ad include Serena Williams, Malala Yousafzai, Oprah Winfrey, Paul McCartney, Lin-Manuel Miranda, Dave Grohl, and even Kermit the Frog. Watch above.

Yesterday on Instagram, KAWS shared a picture of a billboard in Brooklyn featuring him working on his MacBook alongside his BFF character.

The “Behind the Mac” campaign kicked off earlier this year with in-depth videos focusing on artists and their relationship with their MacBook. Grimes and blind photographer Bruce Hall were two of the creatives featured. Watch below.

In other news, Luka Sabbat is being sued for not promoting Snap’s Spectacles.

Apple’s New Mac Book Pro Has Killed Off Its Most Unpopular Feature
DesignsponsoredMay 4, 2020