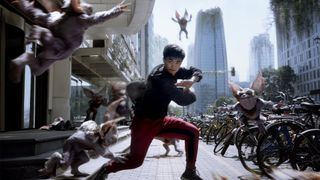 Apple has dropped a new ad highlighting the power of the iPhone X’s A11 Bionic chip, showing off not only some stunning mobile gaming visuals but also how easily the phone can multitask mid-play. The chip is the fastest ever in an iPhone and can run console-quality games and augmented reality apps.

The ad shows a man walking down the street playing iOS multiplayer online battle arena game Vainglory. Suddenly, the environment around him starts transforming and monsters from the game appear, meaning he has to physically fight and defeat them. All the while, he switches between tabs while fighting on his phone and IRL, texting and live-streaming his performance.

The clip ends with the tagline “Unleash a more powerful you.”

Watch the video above and let us know your thoughts in the comments below.

In other tech news, Samsung and Google phones have faster internet than the latest iPhones, according to a new report.