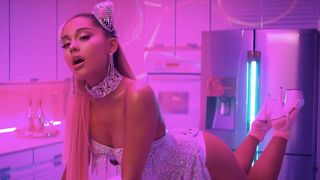 Ariana Grande just dropped the video for new track “7 Rings.” Channeling the melody of The Sound of Music‘s “My Favorite Things,” Grande sings about financial independence and retail therapy. The appropriately excessive neon-heavy video shows Grande and her friends decked out in jewels and partying at a mansion. Watch the clip above.

The track is also the most hip-hop-inspired track Grande has released of late, with the singer walking the line between singing and rapping in places.

The new song follows late-2018 singles “Imagine” and “thank u, next.” Despite releasing her album Sweetener in August last year, the singer has hinted that she has a whole new album’s worth of material ready to go.

In other music news, here are the 10 albums we’re most excited about in 2019.