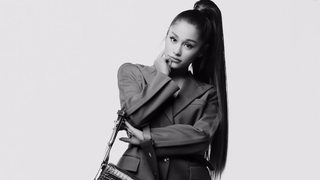 Ariana Grande is the newest face for Givenchy, starring in the new campaign video for FW19. Shot in black and white, it’s a very meta spot, with Grande singing, “I’m shooting my campaign for Givenchy” and taking stage directions from the cameraman. After posing in a variety of new looks, she pulls out her phone—with a Givenchy case, of course—before apologizing, taking a call, and dipping.

Givenchy has been teasing the campaign for months, releasing a short trailer for the campaign in May with the hashtag #Arivenchy and posting more images intermittently. Last week, the luxury house officially released a full lookbook with the singer.

“I am so proud to be the new face of Givenchy,” Grande said in a May press release. “It is a house I have forever admired, and to now be part of that family is such an honor. I love this clothing and the confidence and joy it brings to the people wearing it. Not only is the clothing timeless and beautiful, but I’m proud to work with a brand that makes people feel celebrated for who they are, and unapologetic about whatever they want to be.”