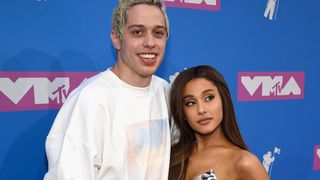 In a recent interview on Zach Sang Show, Ariana Grande revealed that she had prepared backup versions of her No. 1 hit single thank u, next in the wake of her split from ex-fiancé Pete Davidson. During the conversation, the pop star also explained how nervous she was to name her exes on the track because she’s “super shy.”

Back in January when we interviewed Grande’s co-writer, Victoria Monét, she disclosed that one of the lyrics for a different version of the record-breaking song was “I’m about to get married, for Pete I’m so thankful.” However, they immediately flipped the script after he joked about the breakup in a skit on Saturday Night Live where he fake proposed to musician Maggie Rogers the following month. A few days later, Grande tweeted “thank u, next” in retaliation and the rest is history.

Grande and Davidson’s relationship officially terminated in October 2018. Watch the full interview above and revisit our review of thank u, next.

Ariana Grande Has a Message for Those Refusing to Self-Isolate
LifesponsoredMarch 16, 2020