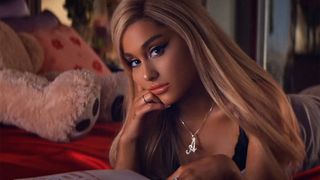 Following the release of Ariana Grande‘s iconic music video for “thank u, next,” the pop star has made even more achievements from the hit single. The Hannah Lux Davis-directed visual has become the most watched video on YouTube and VEVO in the span of 24 hours by racking up 829,000 views and 427,000 comments. As of right now, the video has racked up more than 88 million views.

On top of that, Grande has also been elevated to the status of Most Streamed Artist Worldwide on Spotify and dethroned Selena Gomez by holding down the No. 1 spot in 2018 with 46.9 million monthly listeners. “thank u, next” has been streamed more than 206 million times on the platform. The single also gave Grande her first No. 1 on the Billboard Hot 100. Watch some behind-the-scenes footage from the full video shoot above.

In related news, Eminem referenced the Manchester Bombing attack at Ariana Grande’s concert last year in his latest freestyle. Get all the details right here.