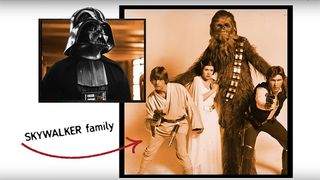 As with most of the best things in life, you don’t know how much you really need something until it slides into your lap. In this case, today’s gift comes in the shape of an Arrested Development x Star Wars mash-up, narrated by none other than the TV show’s voiceover God himself, Ron Howard.

The short three-minute clip is titled Star Wars: A New Hope — Arrested Development Style, and introduces us to the whole Star Wars clan in the Arrested intro vibe, complete with family roles: Han Solo is “the rebel,” Obi-Wan Kenobi is “his mentor,” and so forth.

It then moves on to summarize the first film in the Star Wars franchise — Episode IV: A New Hope, hence the skit’s name — boiling down the actions of Darth Vader, Princess Leia, Luke Skywalker et al, until they seem like a laughably dysfunctional family akin to the Bluths.

In short, it’s hilarious. Watch it above and let us know what you think in the comments.

Yet Another ‘Star Wars’ Movie Is Reportedly In the Works
MoviessponsoredFebruary 22, 2020

Taika Waititi Might Be Developing the Next ‘Star Wars’ Movie
MoviessponsoredJanuary 17, 2020