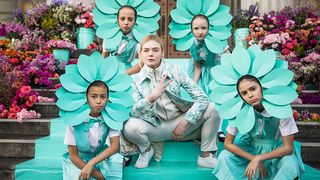 The coinciding campaign film, by Hunger Games director Frances Lawrence, then stars actress Elle Fanning as she peers into Fifth Avenue flagship windows. She is quickly transported from reality to a dreamlike landscape with music and color taking over the streets of New York.

The piece is set to the soundtrack of a reimagined “Moon River,” with Fanning’s vocals paired alongside original lyrics by A$AP Ferg. This accounts for the first time that Tiffany & Co. has created a song, which is downloadable via Spotify.

In other jewelry-related news, this Patek Philippe watch just sold for a record-breaking $642,500 USD at auction.

A$AP Ferg Is Still Part of the A$AP Mob… According to A$AP Ferg
MusicsponsoredSeptember 2, 2020