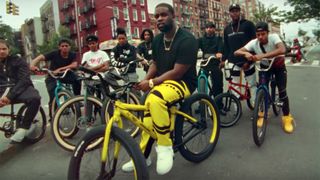 While prepping his new album, A$AP Ferg blesses the internet with a new music video this week. “Floor Seats” is seemingly the title track from his upcoming LP, which appears to be arriving soon.

In the Valentin Petit-directed visual, Ferg can be seen riding around New York City on his collaborative Redline bicycle, the A$AP Ferg x RL 275. Boasting a limited edition colorway, the bike is currently available for $800.

@nigelsylvester The best BMX freestyle rider in the world ? getting crazy on the bike that I designed with @redlinebicycles. Thank you my brother ??

Ferg recently spoke with Apple Music’s Beats 1 about his upcoming album. “It’s gonna be crazy. July is looking very nice,” he said. “It’s called Floor Seats. It’s the floor seats to my life. Like, a lot of people, they see artists and famous people sitting on the floor but they don’t know what it’s like. They don’t know what the VIP access is like and that’s what I’m giving people on this album.”

Floor Seats will serve as a followup to the A$AP Mob member’s second studio album, Always Strive and Prosper, which released in 2016.

A$AP Ferg Was Meant to Be a Fashion Designer
MusicsponsoredNovember 5, 2019