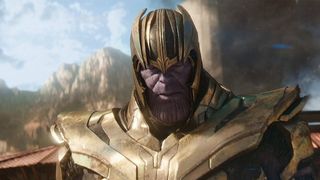 While the ending of Marvel’s most recent Avengers outing shocked fans, killing off a huge number of characters in a cloud of dust, the finale could have been a lot more grisly, according to SlashFilm‘s report from VFX house Digital Domain, which was responsible for bringing the character of Thanos to life in the MCU. In the sequence after Thanos has wiped out half of the life in the universe, one of the early concepts was to show the purple supervillain walking on a river of blood, representing the blood of his victims.

In SlashFilm‘s video, visual effects supervisors Dan DeLeeuw and Kelly Port discuss how Thanos was created. According to DeLeeuw, the idea of having the intergalactic villain wading through a pool of blood representing beloved characters such as Black Panther, Spider-Man, Doctor Strange, and the Guardians of the Galaxy “got a bit dark,” so the plan was axed.

Of course, as the theories go, the mass loss of life at the end of Avengers: Infinity War doesn’t necessarily mean those characters won’t return in the next Avengers movie, which is slated for a 2019 release.

Got a theory about Avengers 4? Throw your ideas in the comments.

In other movie news, the first official trailer for ‘Suspiria’ will make your skin crawl.

The Rumored Alternative ‘Joker’ Ending Is Even More Horrifying Than the Original
MoviessponsoredDecember 31, 2019