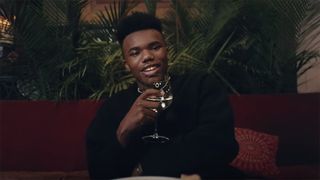 Up-and-coming West Coast rapper Baby Keem this week delivers the official music video for “Orange Soda,” which is taken from his earlier 2019 project, Die For My Bitch. Continuing to strengthen his ties with TDE, Keem collaborated with Dave Free for the visual, which was captured in New York.

Baby Keem released Die For My Bitch back in July, as the buzzing young artist executive produced the record. Prior to the drop, Keem was credited on multiple TDE projects, including the Black Panther soundtrack and Jay Rock’s Redemption.

Just last night Baby Keem kicked off his first-ever headlining tour in Chicago. See below for his upcoming dates and locations.

Sada Baby May Be the Most Inventive Rapper We Have
MusicsponsoredApril 30, 2020

Lil Baby Just Gave Back to His High School in a Super Generous Way
MusicsponsoredMarch 5, 2020