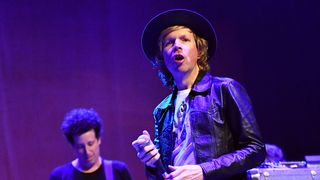 Beck has announced his 14th studio album, Hyperspace. Along with the announcement he released a new single titled, “Saw Lightning,” which is co-written and co-produced by Pharrell. Take a listen above.

The album doesn’t currently have a release date, though his team states that it would arrive at an “undetermined point in the space-time continuum.”

The latest album from the musician follows up his 2017 full-length, the Best Album Grammy-winning Colors. More recently, Beck released “Tarantula,” a song for the Oscar-nominated film ROMA.

Check out his tour dates for the summer here.

Pharrell’s BBC ICECREAM Sneakers Are Back, But Not How We Remember Them
SneakerssponsoredOctober 15, 2019