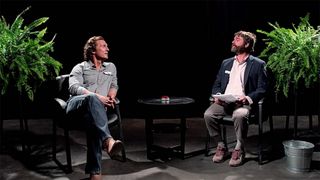 Zach Galifianakis‘ awkward interview talk show, Between Two Ferns, is getting its own movie, as today Netflix shares the official trailer for the upcoming film. Between Two Ferns: The Movie is stacked with celebrity cameos, ranging from Matthew McConaughey and Will Ferrell to Benedict Cumberbatch, Paul Rudd, Keanu Reeves, Chance the Rapper, and many others.

honestly i don’t even have time to tag all the famous ppl in between two ferns: the movie. but you can see it on sept 20th and count them yourself

Between Two Ferns: The Movie is directed by Scott Aukerman and written by Aukerman and Zach Galifianakis. The film is scheduled to release on Netflix September 20.

10 Looks That Prove Michael Jordan is the GOAT of IDGAF Style
SneakerssponsoredFebruary 15, 2020
We Recommend

Anthony Hopkins Finds Himself in a Papal Feud in Netflix’s ‘The Two Popes’
MoviessponsoredAugust 29, 2019

Pennywise Is Out for Revenge in Final ‘IT Chapter Two’ Trailer
MoviessponsoredJuly 18, 2019
What To Read Next
Load More
Search Results
Load More