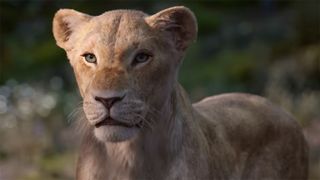 While we’ve received multiple trailers, Beyoncé has yet to make her Lion King debut, until now. Courtesy of a new 30-second clip we finally get to hear Bey voicing Nala in Jon Favreau’s 2019 live-action remake.

You have to take your place as king. #TheLionKing pic.twitter.com/bcVHk35WUk

Beyoncé’s Nala can be heard urging Simba to come home and take his place as king, as she implores his presence is necessary. Press play above to check it out.

Directed by Jon Favreau, The Lion King is one of the most anticipated movies of 2019. Due out July 19, it features Donald Glover as Simba, Chiwetel Ejiofor as Scar, Seth Rogen as Pumbaa, Billy Eichner as Timon, John Kani as Rafiki, John Oliver as Zazu, Alfre Woodard as Sarabi, Keegan-Michael Key as Kamari, Eric Andre as Azizi, and Florence Kasumba as Shenzi, in addition to Beyoncé as Nala.

See below for the previous Lion King trailers.