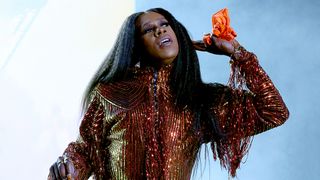 According to The Times-Picayune, Freedia’s publicist contacted the Vermont-based ice cream maker to pitch a new flavor inspired by New Orleans’ self-styled Queen of Bounce. “The answer was no, right away,” Freedia said.

She then took it upon herself to mock up a fake Ben & Jerry’s ice cream tub and mobilized her fan base to sway the ice cream brand. The plan worked, and by June, Big Freedia says she had “middle-age white men twerking in Vermont.”

You already know! Today we teamed up with @bigfreedia to dish out Bouncin’ Beignets for a limited time in #NOLA – a vanilla ice cream with bourbon caramel swirls served with beignets. Proceeds from the event benefit local New Orleans non-profits. Learn more at link in profile.

Ben & Jerry’s has now stated that it hopes the flavor will be sold in stores one day. This weekend saw a one-time-only batch sold locally in New Orleans as a sort of market test, with proceeds going to No Kid Hungry, a nonprofit whose goal is to feed underserved children in the city.