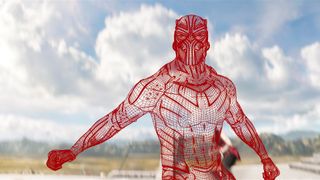 Black Panther was certainly an important film on a number of levels – whether it was providing much-needed contrast to the otherwise caucasian male-led stories we had already seen in the past, or the genius marketing that further drummed up anticipation for the Wakandan-set epic.

As a superhero film first and foremost, the execution of the special effects was of utmost importance. The epic set pieces were handled by Daryl Sawchuk, Visual Effects Supervisor for Method Studios and Animation Supervisor for Black Panther, who recently sat down with WIRED to discuss the digital Black Panther and Kilmonger suits, and the final fight scene in the movie.

As Sawchuk explains it, the suits were originally supposed to be practical effects, but over time, they realized the film would be better served to have full-body replacements and digital doubles integrated into live-action scenes.

“These guys are superheroes,” Sawchuk said. “They’re meant to be performing actions that are bigger and broader than what we’re capable of.”

For more ‘Black Panther,’ watch the costumer designer break down some of the most iconic pieces.

The US Gov. Listed Wakanda as a Free-Trade Partner & Twitter is Face-Palming
LifesponsoredDecember 19, 2019

Nicki Minaj Is Back With New Track & Video, “Megatron”
MusicsponsoredJune 21, 2019
What To Read Next
Load More
Search Results
Load More