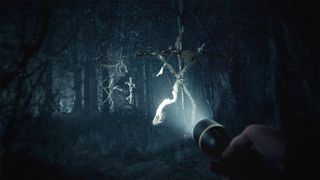 Editor’s Note: The first official gameplay for Blair Witch the game has finally dropped, and with it, comes even more frights and spookiness than the 1999 film. Developer, Bloober Team, describes the upcoming project as a “first-person psychological horror game,” and the trailer couldn’t be more accurate.

After its cinematic reveal during E3 2019, the latest trailer spotlights official gameplay and mechanics used throughout the game. As you, the protagonist, venture out into the woods, you will be accompanied with a trusty dog companion, Bullet. You can issue him commands like stay, hunt, dig things up, and more. The player is also equipped with a flashlight, a cell phone, and possibly a video camera similar to the horror game Outlast.

Releasing on August 30 on the Xbox One and Microsoft Windows, fans of the film franchise will certainly have a terrifyingly good time in the woods. Watch the creepy gameplay trailer above.

The 20 Scary Movies You Should See At Least Once
In-DepthsponsoredMay 21, 2019