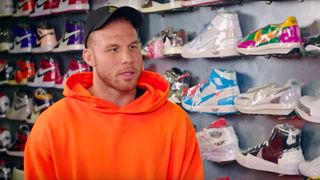 Blake Griffin hit up Detroit’s Nojo Kicks for his episode of Sneaker Shopping, and the Jordan Brand athlete had some interesting stories from his time with the brand. The Pistons power forward revealed he won a bet with Michael Jordan that allowed him to pick his own colors for an Air Jordan 11. Of course, he picked his alma matter Oklahoma’s crimson and white.

Griffin also discussed MJ wanting him to star in Space Jam 2, as well as why he couldn’t wear the light-up Hyperdunks he planned to wear for the dunk contest.

As far as kicks copped, Griffin kept it in-house and light, picking up the Travis Scott Air Force 1s and OFF-WHITE ™ Blazers for a total of $1,855.

Watch the full episode above.