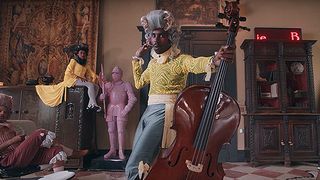 Blood Orange a.k.a. Devonté “Dev” Hynes has directed a lavish music video for “Benzo” fresh off the recent release of his Angel’s Pulse mixtape. The visual evokes the New York drag scene of the late ’80s while also adopting motifs from the Baroque style of Marie Antoinette’s Versailles.

In the Elara Pictures-produced video, Hynes is beckoned to play the cello for R&B star Ian Isiah and his court of powdered-wig-donning subjects. Last week, Isiah shared a semi-NSFW video for his single “Persistent.”

Hynes dropped the new project with relatively little notice, describing his latest offering as an epilogue to Negro Swan which previously featured on the track, “Holy Will.” Watch the full video above and then revisit our full review of Angel’s Pulse.

Blood Orange’s Next Project Will Be a “Magical” Classical Album Called ‘Fields’
MusicsponsoredAugust 21, 2019