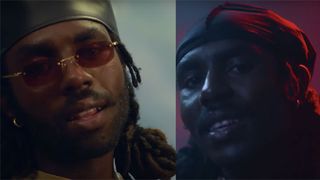 Blood Orange just dropped a video for “Charcoal Baby,” the first single from his upcoming album Negro Swan. In the stunning visuals directed by Crack Stevens, Dev Hynes takes on two different personas, each taking part in a different celebration. The song was co-written with Aaron Maine of Porches, and features backing vocals by EVA. Check out the music video above.

“My newest album is an exploration into my own and many types of black depression, an honest look at the corners of black existence, and the ongoing anxieties of queer/people of color,” Hynes said in a statement. “A reach back into childhood and modern traumas, and the things we do to get through it all.”

Hynes has also shared a self-directed short film for another new track called “Jewelry.” The visual stars Janet Mock, Kai the Black Angel, and Ian Isiah to name a few. His next album Negro Swan follows Freetown Sound from 2016, and will be out August 24 via Domino. Pre-order it here. Watch the video below.

In other music news, Vic Mensa calls out 6ix9ine for disrespecting Chicago. Get the full scoop right here.