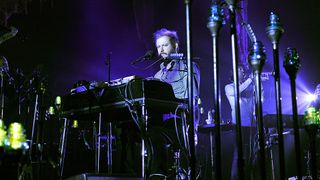 Bon Iver have formally announced the forthcoming release of their fourth studio album, i,i. The full-length project is expected to arrive on August 30 via Jagjaguwar.

“It feels very much like the most adult record, the most complete,” Justin Vernon said in a press release. “It feels like when you get through all this life, when the sun starts to set, and what happens is you start gaining perspective. And then you can put that perspective into more honest, generous work.”

Along with the album announcement and tracklist, the group has shared a new pair of singles titled “Jelmore” and “Faith.” Both songs are available to stream and have accompanying lyric videos. All of the material was recorded in a series of sessions between Texas and Wisconsin, and includes contributions from James Blake, Moses Sumney, Francis Starlite a.k.a. Francis and the Lights, and more.

Bon Iver will also embark on a headlining tour to promote the LP. Scroll down for the full list of international dates.

On this episode of The Dropcast, we are joined by Jabari “Jacuzzi” Khaled, founder of Basketball Skateboards and under-the-radar creative who’s worked with your favorite designer’s favorite designers.