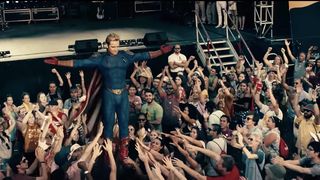 A new trailer has dropped for Seth Rogen and Evan Goldberg’s new TV series, The Boys, and it’s a bloody, douchey superhero-filled extravaganza. Watch above.

The series centers around a corrupt gang of superheroes known as The Seven and a group called The Boys tasked with bringing them to justice. The new trailer highlights the group’s methods and features insane scenes including using a baby as a laser-weapon, severed hands, and fight sequences set to the Spice Girls.