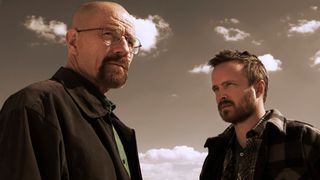 Titled “The Ballad of Jesse Pinkman,” the visual takes us down memory lane as we see instances of Pinkman’s ongoing frustration with his boss, Walter White. Using actual lines from the series, musician Nick Lutsko has formulated them into song. Press play above to check it out.

El Camino: A Breaking Bad Movie follows the story of Jesse Pinkman as he escapes captivity, as shown in the series finale of Breaking Bad. According to Aaron Paul, the film is about the struggle to survive.

You can watch El Camino: A Breaking Bad Movie now on Netflix.

‘Breaking Bad’ Movie Has Already Been Filmed, According to Bob Odenkirk
MoviessponsoredAugust 22, 2019