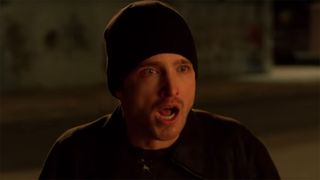 With El Camino: A Breaking Bad Movie releasing in exactly one month, Netflix is kicking off its Breaking Bad rewatch campaign with a new video featuring music by Grammy-nominated duo Chloe X Halle.

The three-plus-minute clip recaps the most heartbreaking moments from Jesse Pinkman’s (played by Aaron Paul) Breaking Bad journey, as they all lead up to when we see him in the final episode of the series. The video is soundtracked by Chloe X Halle’s rendition of 1950’s doo-wop tune, “Enchanted,” made famous by The Platters. You may also remember that this particular song was playing when Jesse tried heroine for the first time with his then-girlfriend, Jane (played by Krysten Ritter).

Written and directed by Breaking Bad creator Vince Gilligan, El Camino: A Breaking Bad Movie follows Jesse Pinkman as he is now a fugitive on the run from his previous captors as well as the law. The film releases on Netflix October 11.