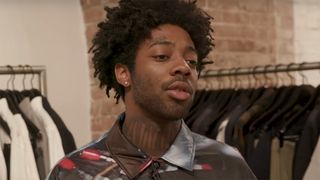 We recently had the opportunity to link up with rising singer-songwriter Brent Faiyaz at Totokaelo in SoHo. During our time with Faiyaz, we perused the racks all while learning more about the 24-year-old musician.

Brent began by dishing on what he liked to wear growing up, including Hot Topic graphic tees, snapbacks, and Nike SBs. He went on to reveal that one of the first standout pieces he landed once he became more well known was a The North Face x COMME des GARÇONS jacket that he was gifted just in time for winter.

From there, Faiyaz touched on brands and styles that he’s currently into, disclosing that he prefers pairing pieces from the likes of Dries Van Noten and UNDERCOVER with Dickies. To close out the segment, he discussed both performing and walking in Pyer Moss‘ much talked-about New York Fashion Week show.

After watching our video with Brent Faiyaz, be sure to check out his lates single, “Rehab,” produced by No I.D.

On this week’s episode of The Dropcast, we are joined by the Patta dons Edson Sabajo and Guillaume Schmidt, who are marking the Dutch brand’s 15th anniversary with historical milestones.

Brent Faiyaz’s Sophomore LP ‘Fuck the World’ Is the Only R&B Playlist We Need
MusicsponsoredFebruary 7, 2020