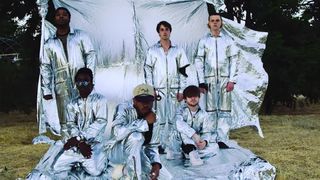 BROCKHAMPTON have just dropped a new song “If You Pray Right” with an accompanying visual, which you can watch above. The release is the second off the group’s upcoming album GINGER, following “I Been Born Again,” which dropped last week.

Directed by Spencer Ford, the video sees the group in matching metallic jumpsuits as they roam around a park followed by a marching band. Toward the end of the clip, the video switches things up, giving us a snippet of the Kevin Abstract-directed “Hood Still Love Me.”

After the video’s release, Abstract promised “a surprise” would arrive later that night and subsequently uploaded an alternate version of “If You Pray Right” onto streaming services. Listen to it below.