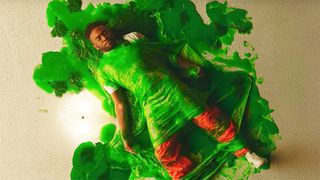 BROCKHAMPTON have finally shared visuals for “SUGAR,” a track taken from the band’s latest studio album, GINGER, which was released in August. The video serves as a trippy, four-minute ride complete with sex scenes, aliens, splatter-gore, and more. Watch the NSFW video above.

The Kevin Abstract-directed visuals kick off with a steamy sex scene, before an alien interrupts and shoots the man — band member Matt Champion — in the head and then proceeds to sing the track’s intro.

That surreal scene sets the tone for the rest of the video, which moves on to include an alien invasion, Champion performing from the fiery pits of hell, and Abstract glued to a ceiling with a mass of green alien goop.

p.s. i was having a really hard time coming up with the concept for the video for sugar and then one day I woke up from an insane nightmare and was like holy fuck that’s the video

You can read our review for BROCKHAMPTON’S album GINGER here.