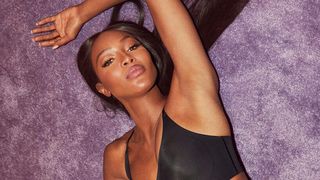 The intimate campaign sees Campbell re-enact Sharon Stone’s Basic Instinct leg-uncrossing maneuver, while Diplo positions his webcam, all to the tune of Groove Armada’s “I See You, Baby.” We see Odell Beckham Jr. in the change room, Elordi munching popcorn in front of a TV and models eating donuts. The footage cuts between these private scenes to a black and white studio shoot that recalls CK campaigns of the ’90s.