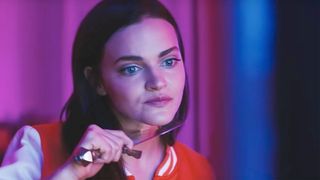 If Black Mirror and Ingrid Goes West had a baby, it might look something like Cam, the upcoming technology-driven psychological thriller that’s set to land on Netflix November 16. Watch the trailer above.

A Blumhouse production, the narrative follows Alice (Madeline Brewer of The Handmaid’s Tale), an ambitious cam girl with a growing fanbase. Everything seems to be going pretty well until one day she discovers her account has been taken over by an exact replica of herself. Losing all control of her life as a side effect, Alice embarks on a mission to identify the mysterious culprit and restore her identity.

The picture serves as Daniel Goldhaber’s directorial debut, with Couper Samuelson (Get Out) on production. Brewer stars alongside Patch Darragh (The First Purge), Melora Walters (Venom), and Devin Druid (13 Reasons Why).

Will you be watching Cam? Let us know in the comments.

In other movie news, a two-hour ‘Breaking Bad’ feature length is on the way.

Steven Avery of ‘Making a Murderer’ Just Won the Right to Appeal His Conviction
MoviessponsoredFebruary 27, 2019