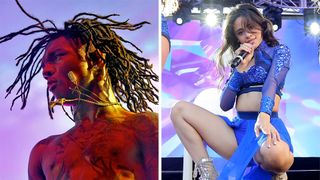 The track wasn’t scheduled to release until tomorrow, but Camila Cabello‘s excitement got the better of her — and we’re glad it did — as the Cuban-American singer-songwriter unleashes her “Real Friends” remix featuring Swae Lee.

The original version of “Real Friends” appeared on Cabello’s debut solo album, Camila, which dropped at the beginning of 2018. Now, however, you can enjoy Swae Lee’s angelic vocals on the breezy tune.

After streaming the “Real Friends” remix above, you can revisit Camila underneath.

For more music, watch Swae Lee and Wiz Khalifa in their new video for “Hopeless Romantic.”

Swae Lee Links Up With Drake For New Track “Won’t Be Late”
MusicsponsoredAugust 16, 2019