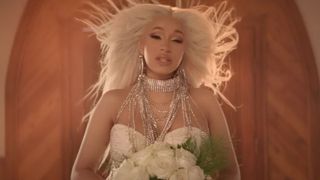 Cardi B is off Instagram for the time being, but the Bronx-raised musician has released her official music video for “Be Careful,” a cut from her debut album Invasion of Privacy.

Directed by Jora Frantzis, the video follows Cardi as she marries a man in the desert, then buries him later in the video (don’t worry, it’s not Offset, who was coincidentally just involved in a gnarly car accident).

Catch the video above, then listen to Invasion of Privacy below.