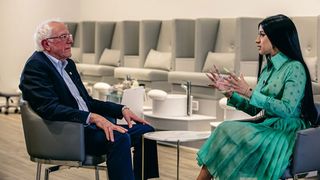 Cardi B has repeatedly used her clout to speak out about political issues. With the Democratic primary race underway ahead of the 2020 presidential election, the rapper is still very much Team Bernie Sanders. Earlier this week, Cardi previewed her intimate interview with the US senator about the state of the economy, immigration, and health insurance among other concerns in America. Now, the full conversation is finally available to watch.

During their intellectually stimulating conversation, Cardi gets straight to the point by asking, “What are we gonna do about wages in America?” She then opens up about her pre-fame experience of struggling to survive with a low income. “When I was not famous, I just felt like no matter how many jobs I get, I wasn’t able to make ends meet,” she says.

Sanders echoes her sentiments, explaining how many Americans are “earning what I consider to be starvation wages,” before disclosing his plans to tackle the problem. The highlight is when he asks Cardi about her admiration for President Franklin Delano Roosevelt. Watch the whole discussion unfold in the video above.