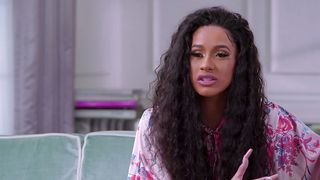 On Thursday’s episode of WeTV’s Untold Stories of Hip Hop, Cardi B revealed that she was sexually harassed by a photographer during a magazine shoot and the publication’s owner appeared not to care. Watch (around the 17.25 mark) in the video above.

Explaining the situation to TV and radio host Angie Martinez, Cardi said, “I went to shoot for this magazine and the photographer, he was trying to get close to me like, ‘Yeah, you want to get in this magazine?’ Then he pulled his dick out. I was so fucking mad.”

She continued, “You know what’s crazy? I told the magazine owner and he just looked at me like, ‘So? And?’”

While Cardi did not name the magazine, the photographer, or when the event took place, she did state that this type of behavior is not uncommon.

“When I see the #MeToo movement – there’s girls from the hood I know that went through the same type of treatment. They make you feel like you got to do a certain type of thing. It happens every day.”

When asked if she had experienced similar harassment recently, she said no. If anyone dares? She would “put you on blast on my Instagram.”

Speaking on #MeToo with Cosmopolitan back in 2018, Cardi shared the same sentiment. “A lot of video vixens have spoke out about this and nobody gives a fuck. I bet if one of these women stands up and talks about it, people are going to say, ‘So what?'”

Cardi B Claps Back at Body Shamers: “Leave My Rolls Alone”
MusicsponsoredJune 18, 2020

Here’s Why a Cardi B & Beyoncé Collab Was Scrapped
MusicsponsoredMay 13, 2020
Follow
Highsnobiety Music
What To Read Next
Load More
Search Results
Load More