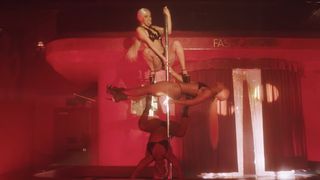 Cardi B just premiered the accompanying visual for her latest single “Money.” As the title suggests, the Bronx rapper is all about that cash flow. The Jora Frantzis-directed video depicts the lavish interiors of a museum along with a Victorian-esque bank that have been transformed into a glamorous strip club. Along with proudly showcasing her pole-dancing skills along with a gorgeous group of dancers, Cardi B also shows off her natural ability to count stacks of money and upset snooty elders. Additionally, Kulture Kiari makes her official video debut in another scene where Cardi breastfeeds the beloved baby.

Prior to the drop, Forbes and Chart Data reported that all 13 tracks on Invasion of Privacy have been RIAA certified gold or higher. As expected, Cardi B acknowledged this monumental achievement in a post on her social media channels. Last week, the 26-year-old was nominated for five Grammy Awards including Best Rap Album, Song of the Year, and Best Rap Performance.

BIG MOMMA BARDI !!Im happy my album is amazing but I got sooo much pressure an anxiety cause I know I gotta kill it with my second one ???

For more on Cardi B, watch her perform “I Like It” to a bunch of senior citizens on ‘Carpool Karaoke.’

The Uber Credit Card Is Relaunching With 5% Back on Ubers
DesignsponsoredOctober 29, 2019