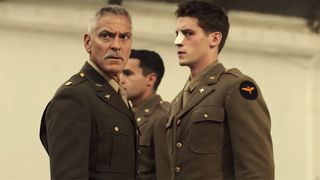 Hulu‘s new original series, Catch-22, is scheduled to premiere in less than a month. Ahead of the release, today the entertainment company shares an official trailer for the program.

Catch-22 is based on the acclaimed Joseph Heller novel, centering around a US air squadron in Italy during World War II. Christopher Abbott stars as a bombardier named Yossarian, while George Clooney portrays a barking mad, parade-obsessed officer. Kyle Chandler then appears as Colonel Cathcart, alongside Hugh Laurie’s Major de Coverley.

The series is named after a military by-law, Catch-22, stating that if you fly your missions, you’re deemed crazy and therefore don’t have to fly them. But if you ask to be dismissed from your missions, you’re considered sane, leaving you forced to fly. This is the exact predicament that Christopher Abbott’s Yossarian finds himself in for Catch-22.

Catch-22 is slated to release on Hulu May 17. Get your latest look at the series above.