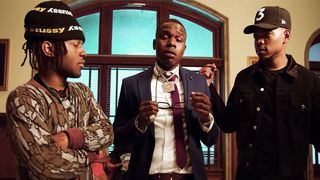 Fresh off a hosting gig at Saturday Night Live, Chance the Rapper has just released visuals for his “Hot Shower” single, featuring DaBaby and MadeinTYO. Watch Chance the Rapper‘s latest video above.

In the comedic clip, Chance is joined by both and DaBaby and MadeinTYO, as well as New Girl actor Jake Johnson, who plays a businessman who owes $50,000 to the mob. Towards the end of the clip, Johnson tries calling Chance to ask for a loan, but the phonecall goes straight to voicemail. Directed by Reel Goats (who regularly work with DaBaby), the video also sees a quick cameo from actor Kel Mitchell from Kenan & Kel.

“Hot Shower” is Chance the Rapper’s latest single off The Big Day, his debut studio album which saw a release this past summer.

Chance the Rapper Drops His Latest Music Video for “We Go High”
MusicsponsoredOctober 12, 2019

Chance the Rapper Links Up With YBN Cordae at the BBQ for “Bad Idea”
MusicsponsoredJune 18, 2019